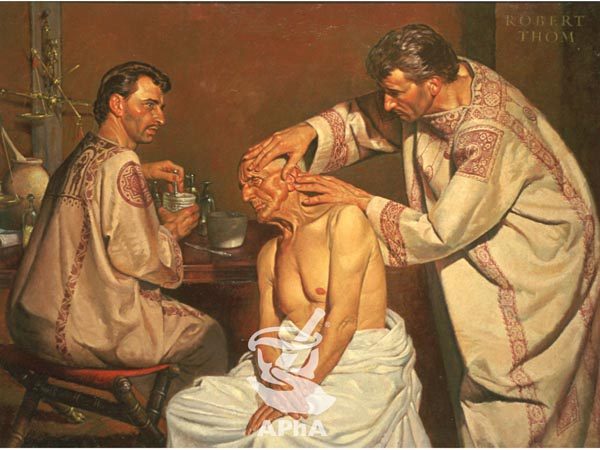 Saints Cosmas and Damian were twin brothers who were Arab physicians in the town Cyrhus, and were  early Christian martyrs. They practiced their profession in the seaport of Aegeae, then in the Roman province of Syria. The Holy Wonderworkers and Unmercenary Physicians Cosmas and Damian and their mother Saint Theodota were natives of Asia Minor (some sources say Mesopotamia). Their pagan father died while they were still quite small children. Their mother raised them in Christian piety. Through her own example, and by reading holy books to them, Saint Theodota preserved her children in purity of life according to the command of the Lord, and Cosmas and Damian grew up into righteous and virtuous men.

Accepting no payment for their services led to them being named anargyroi (from the Greek Ανάργυροι, 'the silverless' or 'unmercenaries'); it has been said that, by this, they attracted many to the Christian faith. Nothing is known of their lives except that they suffered martyrdom in Syria during the persecution of Emperor Diocletian.

The execution took place on the 27th of September in the year 287. Later, several fables grew up about them, connected in part with their relics. The remains of the martyrs were buried in the city of Cyrus in Syria; the Emperor Justinian I (527-565) sumptuously restored the city in their honor. Having been cured of a dangerous illness by the intercession of Cosmas and Damian, Justinian, in gratitude for their aid, rebuilt and adorned their church at Constantinople, and it became a celebrated place of pilgrimage.

At Rome, Pope Felix IV (526-530) erected a church in their honor, the mosaics of which are still among the most valuable art remains of the city. The Greek Church celebrates the feast of Saints Cosmas and Damian on 1 July, 17 October, and 1 November, and venerates three pairs of saints of the same name and profession. Cosmas and Damian are regarded as the patrons of physicians and surgeons and are sometimes represented with medical emblems. They are invoked in the Canon of the Mass and in the Litany of the Saints.

Saints Cosmas and Damian are the patron saints of the University of Santo Tomas Faculty of Medicine and Surgery. Their feast day is celebrated every 26th of September.