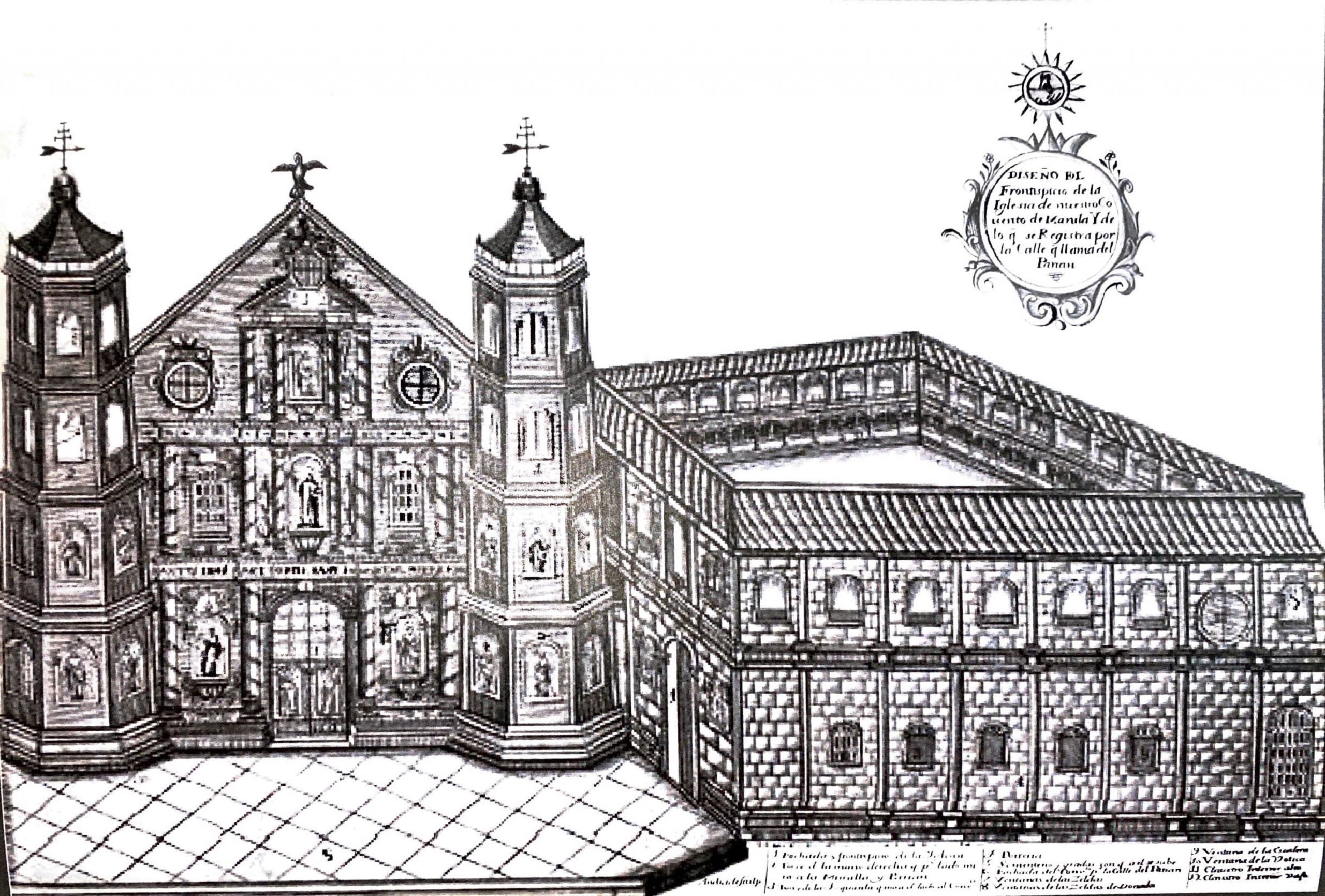 Hospital Services of the Misericordia of Manila

What follows is a summary of the main areas of the statutes concerning visits to the sick and hospital attention. The Mesa (table in Spanish) of the Misericordia, a board of 13 guardians elected yearly, ran the operations of the Brotherhood. Every month, the Mesa appointed teams of two brothers, the stewards of the needy and the sick, to go on visits to disabled Spaniards and pobres vergonzantes. The stewards gave them alms and looked after their basic needs or brought them to the hospital if they needed special medical attention. Another task of the stewards was to pick up sick slaves abandoned by their owners and confine them in the hospital of the Brotherhood. The stewards performed their duties in one of the four districts of the city assigned to them. One team covered the area from the Fort Santiago at the tip between the river and the sea up to the Cathedral, and from the Puerta del Perdón on the seashore to Santo Domingo Church by the river. The second checked the needy and sick in the next set of streets, ending on the street connecting San Agustin Church on the seashore and the Hospital de la Misericordia by the river. The stewards covering the second district were also assigned to look at the attention of the sick in the Hospital of the Brotherhood. The third group of stewards went to the rest of the walled city. The last looked after the destitute and sick in the neighborhoods outside the walls of the city, especially from the area of Laguio up to the shrine of Our Lady of Guía.

Slave owners were encouraged to look after their sick slaves back at home, except for those owners without enough financial resources. The Misericordia offered the services of a surgeon free-of-charge to attend to anyone who wanted his wounds treated, on an out-patient basis. The Brotherhood also provided alms for the recovery period of some sick, making specific mention of those who needed to go to thermal waters. As a rule of prudence, these recovery alms, however, were never given in cash. The steward of the Hospital received the alms and bought the items needed by the sick person in a champan, the boat of Chinese traders, and he handed those goods to the sick.

In time of crisis, the members of the Misericordia had to carry out hospital services in a special manner. In 1599, there was a plague in Manila that affected mostly the Filipino population, which meant that it might have been caused by a virus or agent to which the Filipinos did not have much resistance. The brothers of Misericordia took care of supplying the sick with food and medicine, and even joined the wake and burial of the dead, winning the sympathy of the Filipino population. The Brothers of the Misericordia had an increase of social work after a number of mishaps, like the 1599 earthquake, galleon losses in the following years, the city fire and the Chinese insurrection of 1603. The usual pairs of stewards were not enough and oftentimes, other brothers had to get involved in assisting those in need and burying those who died in those calamities. The Audiencia of Manila reported in 1602 that the stewards of the Misericordia were taking care of the destitute and the sick, and that the Brotherhood was running the hospital effectively.

In the succeeding decades, the Hospital continued providing acceptable medical assistance. In 1621, the Archbishop of Manila reported that the Hospital de la Misericordia had admitted 80 to 100 slaves, both male and female, in separate quarters, and 12 to 20 poor Spanish women. A piece of news from Jesuit documents confirmed that, some Jesuits, together with some members of a Brotherhood of black slaves they had established in Manila, coincided in 1627 with some Brothers of the Misericordia while visiting the sick in a hospital. Even though the source does not mention the name of the hospital, it is reasonable to think that slaves were visiting slaves, which would mean that they went on a visit to the Hospital de la Misericordia." Archbishop Hernando Guerrero informed the King in 1639 that aside from admitting slaves and Spanish women, the Hospital de la Misericordia also cured poor people on an outpatient basis.

The Brothers of the Misericordia did not have medical training, thus, their task was to bring the sick to the Hospital, offer Christian sympathy to the sick, supervise the running of the Hospital, hire the services of more specialized personnel, and especially, meet the expenses of the Hospital using the funds of the Brotherhood. Early news does not specify much about the origin of the funds except that most of them came from donations and alms collection. The amounts collected must have been large enough to cover the needs of the Hospital since there were no complaints on the matter until the second half of the sixteenth century.

Since 1598, the Misericordia started receiving endowments to subsidize its expenses. The endowments then invariably specified that the donated money had to be used as censos, which were mortgage loans with a fixed 5% yearly interest rate. By 1621, the Misericordia managed 19 endowments which amounted to a capital of 69,400 pesos and yielded an interest of 3,600 pesos yearly. Even though there is no available documentation to prove it, the Mesa could have used part of it for the expenses of the hospital. The first endowments expressly targeting the hospital date from 1624. Antonio de Ariziga endowed 4,000 pesos and assigned one fourth of the yearly interest, or 50 pesos, for the expenses of the hospital. Juan Ginés del Pino endowed 443 pesos and wanted the 22 pesos earned to be used for the sick Spanish women of the Hospital. The next endowment exclusively for the Hospital came in 1675, when the Hospital did not belong to the Misericordia anymore. A Portuguese trader living in Manila, Manuel Suarez de Olivera, donated some properties for lease in the Arroceros neighborhood, and half of the yearly interest was allocated to the expenses of the Hospital.

Several factors, one internal to the Misericordia and others beyond its control, caused a decline of the services offered in the Hospital. ln 1634, the Misericordia opened a residence for orphaned Spanish girls within the facilities of the headquarters of the Brotherhood in the lot next to San Agustin church on the Calle Real. The residence was called the Colegio de Santa Isabel. The Misericordia put up the residence in order to look after the upbringing of Spanish girls who would be the future brides of Spaniards of the upper social class. A decline of the Spanish population since the second decade of the century had motivated such an undertaking. By 1634, there were only around 700 Spaniards of the middle and upper social classes, and in 1638, that group diminished to as low as 300 people. The members of the Misericordia realized that subsidizing the residence was one of the most important charitable works they could do for the Spanish community as a whole, even though it may look self-serving now. Since then, the Colegio de Santa Isabel became the most important project of the Brotherhood, and the one that used most of its financial resources.

In the coming years, Manila experienced several mishaps that greatly affected its economy, in addition to the financial pressure from having to maintain the residence. In 1639, a Chinese revolt caused an economic crisis whose effects were felt until 1645, the year when a severe earthquake caused a huge physical damage to most buildings of the City. The financial resources of the Spanish community dwindled so that most citizens focused on rebuilding their fortunes, postponing charitable pursuits temporarily. Aside from a decrease in donations, the Misericordia suffered from the lowering of its expected income from the endowments of mortgage loans to half of the original value. Another earthquake in 1654 made the slow economic recovery even worse.

Due to the economic crisis, attention to the Hospital de la Misericordia declined noticeably. Patients were neglected and many died because of lack of medicine and attention from any doctor. The Hospital had only one ward, not allowing proper separation between male and female patients. The situation was such that when trader Nicolás de Luzuriaga was chosen proveedor of the Mesa at the end of 1655, the first thing he did was to propose to the Archbishop and the Governor-General to transfer the administration of the Hospital to the few Brothers of the Hospitaler Order of San Juan de Dios, who had arrived in Manila not long ago. It did not take much convincing for the civil and ecclesiastical authorities to approve the suggestion, more so because there had been many requests to the King in the past to allow the Order to come to the Philippines. Likewise, the superior of the brothers of the Order, Fr. Francisco de Magallanes was very willing to take over, since at that time, the few religious of the Order were just looking after a temporary infirmary in the district of Bagumbayan, just outside the walls of the City.

Magallanes made sure that the handover also included all the material belongings and sources of income. The latter included the previous donations of all types, like properties for lease and endowments of censos. The Mesa, in turn, demanded continuing the service of treating the poor and sick Spanish and mestizo women, and slaves of the citizens of Manila, both male and female. Slave owners had to pay three pesos for the treatment of their slaves in the Hospital, unless they were too poor even for that. Slave from the Colegio de Santa Isabel and the Misericordia would be treated free of charge. The Mesa pledged a donation of 200 pesos yearly to pay for the medical assistance of the girls of the Colegio de Santa Isabel. The Mesa was granted an honorary privilege of a yearly visit to the facilities of the existing ward of the Hospital in order to propose improvements to the archbishop. The Hospital was to retain its former name; however, at a later time people started calling it the Hospital de San Juan de Dios.