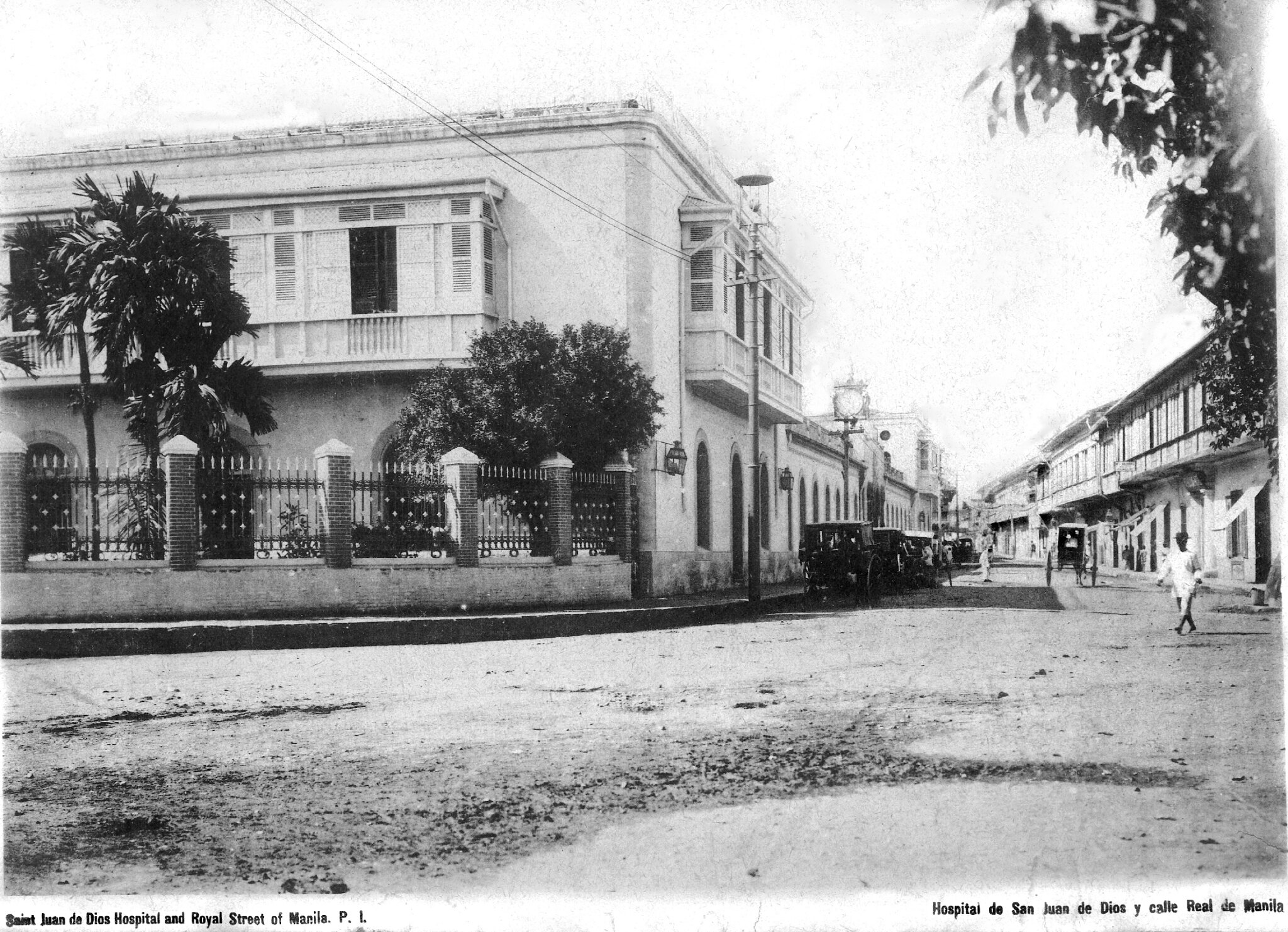 A second point of the study is the actual involvement of the Misericordia in the running of the Hospital. The main responsibilities of the Brotherhood were the administration of the facilities, the supervision of the medical and social assistance provided to the sick, and the financial support of all the expenses of the Hospital. Besides, the brothers of the Misericordia also performed some simple charitable works for the sick.

The establishment of a residence for Spanish orphan girls on the part of the Misericordia and the economic difficulties experienced in Manila after 1639 led to the turnover of the Hospital to the brothers the Order of San Juan de Dios. The Misericordia relinquished its previous obligations and became one of the major patrons of the Hospital. This paper discusses as well the different types of financial aid provided by the Misericordia to the Hospital throughout different times, and how effective they were. The most important ones were revenues from endowments, either based on mortgage loans or maritime trade loans. Finally, this paper also takes up some specific documentation showing how the Misericordia prioritized funding the medical service of the Hospital.

Medical Assistance in Manila at the end of the Sixteenth Century

Manila was founded in 1571 in a stretch of land on the left side of the Pasig River, just where the river meets the sea. The City followed the usual grid organization of streets intersecting at the right angles which was common in the new establishments of Spanish America. Lots were assigned by the government to Spanish citizens, the clergy, and religious orders. The Spanish population was less than 1,500 in the last decade of the sixteenth century. As the City was developed, Filipino neighborhoods sprawled around it in growing numbers. In 1591, the Spanish government counted 3,000 heads of families of the Filipino population around Manila, each one representing a family of four or five. Attracted by the Mexican silver, the Chinese community of merchants increased after the founding of the City, taking care of the basic commodities of the Spanish community. The Spanish government tried to limit their number to 6,000 and their quarters to the Parian district, outside the walls of the City, but their numbers were usually larger. The last human group in Spanish Manila was made up of slaves coming from India. Timor, or even Africa. They were a minority but worked mainly in the household of the Spaniards and were rather conspicuous in the City.

To date, there are no detailed studies yet on the extent of diseases in the early Spanish period; however, it is reasonable to assume that the different social and racial groups of Manila were exposed to various diseases due to the climatic, geographic, and demographic characteristics of the place. Diseases like malaria, yellow fever, and leprosy thrived in tropical weather, characterized by high temperatures, elevated humidity, and abundant rains. Such climatic conditions also led to pulmonary and respiratory sickness like colds, flus, or tuberculosis. A swampy landscape and the lack of sanitary infrastructure paved the way to typhoid, cholera, and dysentery. Europeans, slaves or even Chinese brought diseases like smallpox, measles, syphilis, and scurvy.

Presence of significant levels of disease is proven by the early establishment of Hospitals in the City for various racial and social groups. The first Hospital of Manila was the Hospital Real, established around 1575 or 1576, barely five years after the founding of the City and whose main objective was to treat rank and file soldiers and sailors. Two years later, in 1578, a Franciscan lay brother Juan Clemente started treating sick natives at the entrance of the monastery of the order, which developed into an infirmary and eventually become the Hospital de Naturales for Filipinos. In 1587, Fr. Miguel Benavides started a Hospital for the Chinese next to the Dominican Church of San Gabriel in the Parian.

Before proceeding to explain how the next Hospital was established, I must clarify to the modern reader that during those days, those who went to Hospitals were only those who could not afford the services of a doctor at home. Therefore, confinement in a Hospital was a sign of poor income and/or lack of family to look after the person at home. Furthermore, Hospitals then did not have our present-day medical advancement, and in many cases, they were just places where those without a home or a family went to spend their last days. While beginning of the 1590s, Manila was addressing the Hospital needs of three social groups. The Hospital de la Misericordia would come to give medical attention to other underprivileged groups.

The Foundation of the Hospital de la Misericordia

The types of sick people treated in the Hospital de la Misericordia were related to the groundwork in the area of social assistance of Fr. Juan Fernandez de Leon. He was a Spanish priest who arrived in the Philippines in 1591. He lived a hermit’s life of prayer and penance, and gave alms to those who went to him begging. The beneficiaries of his alms were poor, sick, and destitute soldiers, the handicapped, and pobres vergonzantes, that is, well-to-do Spaniards who had become poor and were trying to keep up appearances. Typical among the last type of destitute were widows, of whom there were many in Manila, and orphan girls. As more people went begging to Fr. Fernandez, he included in his work some upper-class Spaniards with Christian ideals to collect donations and give alms to the needy. Besides, Fr. Fernandez went often on weekends to the Hospital de Naturales to give a hand to Bro. Juan Clemente, to the point that he decided to add a make-shift ward near the Hospital to increase the capacity of the two other wards built by Bro. Clemente. Some time in 1593 or 1594, it was suggested to Fr. Fernandez to found a Brotherhood that will take over his charitable work and he agreed. The Brotherhood that was proposed was Casa da Misericordia, which was very common then in Portugal and overseas Portugese territories. The infirmary he built, however, was left to the care of the Franciscans.

In 1594, the interim governor-general, Luis Perez Dasmarinas, informed the Spanish King about the founding of the Brotherhood, and that its members came from the upper social class in town. Dasmarinas granted a provisional approval to the Brotherhood and became the first proveedor, or head of the board of guardians of the Brotherhood. Dasmarinas incidentally reported to the King in the same letter that, while the City had a hospital to treat Spaniards and another to look after Filipinos, there was none to look after the sick slaves and (Filipino) servants of the Spaniards. Three years later, Dasmarinas informed the King that Misericordia had founded a hospital for slaves and servants, and that the brothers of the Misericordia were running it so well that he proposed to the King to entrust the administration of the Hospital Real to the Brotherhood, and to ask the Franciscans to look after the spiritual and medical care of the sick. Besides, Dasmarinas informed the King that Spanish and mestizo (mixed race from Spanish and Filipino parents) women were treated at the Hospital de la Misericordia because they had nowhere to go, and the Hospital Real would not accept them. By curing and admitting the servants and slaves of the Spaniards and the destitute Spanish women, the Misericordia filled up the Hospital needs of the lower social classes of Manila. Subsequent news about the Hospital de la Misericordia would always confirm that the Hospital treated mainly slaves and servants of the Spaniards and destitute Spanish and mestizo women. The choice of sick people was fitting for the social group that made up the Brotherhood behind the Hospital. Looking after the sick slaves and servants could be either an act of charity toward those who had served them, or for others, a solution to the burden of having to look after them. Providing attention to moribund Spanish women was as well a duty of charity, which in this case, was especially motivated by racial ties.

Circumstantial documentation about the years of the charitable work of Fr. Fernandez and the first steps of the Hospital de la Misericordia provides glimpses of the state of medical and Hospital services in the early Manila. The same chronicler of the activity of Fr. Fernandez describes how Bro. Juan Clemente treated people with joint problems, sores, and leprosy. Aside from cleaning their sores and ulcers, he had learned how to make ointments with coconut oil and tobacco leaves or other aromatic plants and roots mixing them with some ingredients imported from China. He also knew how to make plasters, syrups, and purges. Bro. Clemente performed surgical procedure as well. His reputation spread fast so that sick people from all races and social groups sought his treatment. Aside from giving the best possible medical attention to the sick, he was a man of great faith and Christian zeal, so that he never forgot asking people to pray and have faith in the saving power of Jesus Christ. The material conditions of the Hospital de Naturales were fairly adequate, especially after Bro. Clemente built the stone walls for the wards. His Hospital provided shirts, bed linens, and pillows for 200 persons. Besides, the Hospital de Naturales had a pharmacy.

Dasmarinas requested royal permission to unite the Hospital Real to that of the Misericordia, explaining that the soldiers in the royal Hospital were not well taken cared of. The main reason given was corruption of the administrator even if he received a salary. After much convincing, the Misericordia agreed to take over the administration of the Hospital Real. The assignment lasted only three years but the Brotherhood was able to turn a deficit of 300 pesos, at the time it took over, into a surplus of 3,000 pesos at the end of its term. The performance reflects the dedication and honesty of the members of the Brotherhood.