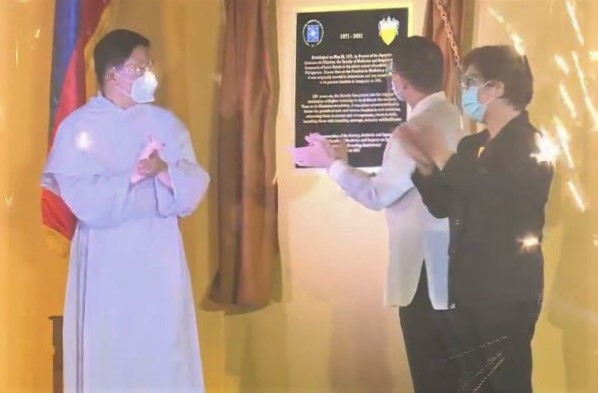 Fr. Ang paid tribute to the past generations of UST FMS alumni who paved the way for future UST doctors. He also stressed the importance of preserving this legacy and honoring their sacrifices by forging a clear vision for the next 150 years.

The inaugural celebration was attended by around 200 guests. The Dean, Dr. Ma. Lourdes Maglinao, led in welcoming the guests. Notable keynote speakers, namely, Rev. Fr. Gerard Francisco Timoner III, O.P., Master of the Order of the Preachers, and Health Secretary Francisco Duque III joined the festivities. The feeling of pride and gratitude filled the air among the Thomasian doctors and faculty members during the ceremony.

The historical marker was also unveiled during the inaugural celebration and a second one was unveiled at the Plaza Santo Tomas in Intramuros, the original site of the University of Santo Tomas, last May 29,2021.

“Established on May 28, 1871, by Decree of the Superior Gobierno de Filipinas, the Faculty of Medicine and Surgery of the University of Santo Tomas is the oldest school of medicine in the Philippines. Known then as the Facultad de Medicina y Cirugia, it was originally located in Intramuros and was transferred to its present location in Sampaloc in 1945.

150 years on, the Faculty has grown into the biggest institution of higher learning in medicine in the country. True to its Christian mandates, it reaffirms its commitment to foster the growth of men and women of science and medicine, educating them in reason and strengthening them in faith, branding them with humility, courage, industry, and brilliance.

In commemoration of the history, fortitude, and legacy of the UST Faculty of Medicine and Surgery on its Sesquicentennial Founding Anniversary”

The FMS Thomasian community has lined up yearlong activities to celebrate the sesquicentennial anniversary by organizing events such as the USTMED 150 Webinar series which started last March 23,2021. They also had the Sesqui Tele- Med Mission and online medical mission that run last May 24-28, 2021, and The FMS Community Pantry last May 28 and 29,2021 that provided groceries for around 400 members of the internal and external public as some beneficiaries were from the UST service units and from the Intramuros community.

The Sesquicentennial celebration of the Faculty of Surgery and Medicine is a monumental milestone. In the Dean’s speech, she cited, that in the near- future, the Saints Cosmas and Damian Simulation and Research Center will soon rise to develop the next generation of doctors and be the symbol of Philippine medical excellence led by the University of Santo Tomas.