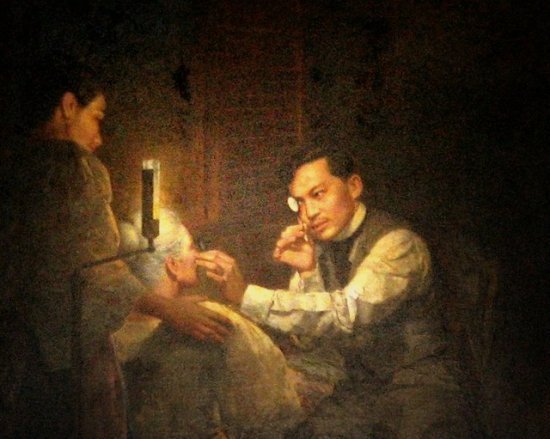 While some strides have been made in the area of general histories, research on medical specializations has been neglected with offerings currently on the paltry side. To my knowledge, only the following areas have so far received investigation - ophthalmology, mental illness, midwifery, and obstetrics and gynecology. I shall now deal with these in turn. The avid interest in ophthalmology stems of course, from the abiding interest of scholars in the Philippines' foremost national hero, Jose Rizal, the country's most famous ophthalmologist. Novelist, patriot, and polyglot, Rizal was keenly interested in medicine and science as disciplines that, in his view, crucially offered the key to progress, modernity, and most instructively, a vocabulary through which nationalist longing could be articulated. He eventually specialized in ophthalmology, training in clinics in Paris and Heidelberg from 1885 to 1886.

Inevitably, this association with the First Filipino (as Rizal has come to be regarded) has privileged ophthalmology, with scholars from a variety of disciplinary backgrounds -- within the humanities as well as the sciences - confining their investigations to the myriad ways in which medicine exerted an influence in Rizal's life and developing nationalism. This has been to the detriment of research on other medical and scientific specializations. An issue of the Philippine Journal of History published in 1961, to commemorate the 100 year anniversary of Rizal's birth, drew together a collection of essays focused exclusively on ophthalmology in relation to aspects of Rizal's life from his training in Europe, the treatments he applied on his patients at the clinic he briefly established at his parents' provincial home in Laguna, and how the restoration of sight to the blind informed his patriotism.

Nevertheless, it is important to mention how studies on the medical aspects of Rizal's life have done much to promote research into 19th Century medical education, tentative explorations into the lives of other 19th century elite medicos, and cultivate an interest in the writing of biographies of other pioneering Filipino physicians who began to emerge in the early 20th century. There is a growing body of work on the training of Filipino physicians in the Philippines prior to the 20th century with scholars examining institutional structures, personnel, specifically medical teachers and mentors, medical curricula, classroom teaching and laboratory work. We wait for example, Fidel Villaroel's forthcoming monograph on the history of the Universidad de Santo Tomas and the establishment of the Faculty of Medicine and Surgery. The physician and historian Luciano Santiago has recently offered two essays that give invaluable basic details on the careers of the first Filipino graduates in medicine, pharmacy, and law from the Universidad de Santo Tomas and those who later went to Europe to continue their training, taking up internships at clinics and hospitals during the late 19th century. Important biographies have been written on the careers of the first women doctors such as Honoria Acosta-Sison and Paz Mendoza Guazon, and doubtless there will be more. The physicians Willie and Anna Liza Ong have recently contributed to the documentation by interviewing a number of distinguished late 20th century physicians, some of whom have since died.

If biographies are promising to be an area of growth, the topic of mental illness in Philippine history continues to be ignored. The publication of Foucault's renowned work Birth of a Clinic, brought about extensive scholarly interest in Europe and the United States on the history of mental illness, insanity and mental asylums in the west. In contrast, literature on the histories of health care in Southeast Asia has generally neglected this topic with scholars tending to focus on tropical medicine, malaria in particular, nursing and health care in rural areas. The neglect of Spanish colonial records on insanity in the Philippines is difficult to explain as the subject poses an intriguing conundrum. Insanity seems not to have been considered by pre-20th century Filipinos as ill health and therefore treatable. Insanity, like leprosy, as the American demographic historian Ken de Bevoise has speculated, may have been thought of as a non- disabling condition of 'non-health', rather than ill health, and a condition that was either inherited or innate. Sufferers were therefore permitted to live amongst a well community unmolested but also untreated. What the Spanish colonial physicians and health policy-makers made of this would be an interesting area of study and there are glimmers in this direction. An unpublished masteral dissertation by a Filipino student at the University of the Philippines on mental illness in late 19th century Philippines marked a promising flicker of interest in the topic. Mainly bibliographic rather than analytical, the dissertation brought to light available sources on mental illness in that period which could be found in the Philippine National Archives.

Research on the subject of midwifery and the birth of obstetrics and gynecology has fared better. Medical anthropologists in general have long taken interest in birth practices, customs and beliefs found within an astonishingly diverse range of societies and cultures. Historians, however, are only just beginning to make inroads in the historical study of midwifery, and the development of modern obstetrics and gynecology, Philippine sources on midwifery, indigenous practices and customs on child birth, the care of parturient and post-partum women are abundant and richly detailed. Description can be found in 16th century Spanish missionary chronicles, the Jesuit Chirino's Relacion, is but one example, later travel accounts by European visitors carry insightful observations and vivid anecdotes such as those recorded by the French 19th century administrator Jean Mallat; treatments and remedies for women experiencing difficult childbirth and in a post-partum condition, are also detailed in popular books on medicine that were written in the vernaculars and proliferated from the late 18th century until the beginning of 20th century, childbirth customs were detailed in studies on the superstitious beliefs of Filipinos by Orientalist scholars writing in the 19th century including the Bohemian historian and friend of Rizal, Ferdinand Blumentritt, and the Spanish journalist turned historian, Wenceslao Retana, in his study Supersticiones de los Indios Filipinos: un libro de aniterias published in 1894.

Sources on midwifery and licensed midwives, the matronas titulares, the opening of the Escuela de Matronas in 1875, and the introduction of gynecology in medical courses offered at the Faculty of Medicine at the Universidad de Santo Tomas (UST), are equally abundant and can be found in a number of folletos at the archives of UST and the National Archives in Madrid. Cynthia Luz Rivera has commented on the collection of papers at the UST concerned with the enrollment, training of midwives and their course of study in a recently published article. Megan Thomas, an American political historian, recently delivered a conference paper, as yet unpublished, on 19th century midwifery using the UST papers; and Maria Luisa Camagay, again drawing on manuscripts from the UST and the Philippine National Archives has published two important essays on indigenous and 'unlicensed midwives- hilot, partera, comadrona, and the matronas titulares which has broadly contributed to scholarship on the history of women, and more specifically working women in the 19th century Manila.